VLAWMO extends its appreciation and congratulations to local Eagle Scout Alex Nelson for the recent completion of his Eagle Scout badge.

Alex was in search of an Eagle Scout project in the Fall of 2021, and reached out to VLAWMO for potential project ideas. When learning about the work VLAWMO does on a community level, Alex's attention turned towards the various raingardens that have been built with community partnerships. The idea to conduct a brush-up effort for a raingarden showed to be a good fit due to the blend of on-the-ground work and community involvement.

Alex took on a leadership role for the project, coordinating multiple moving pieces to make the vision a reality. In the spring of 2023 Alex approached staff at Saint Mary's of the Lake to present the project idea, establish an understanding of the scope, and get acquainted with the staff. With support from Saint Mary's, Alex completed a Community Blue grant application, which was approved by the VLAWMO Technical Commission in April of 2022 to fund new plants and fresh mulch.

VLAWMO supported Alex in getting familiar with plant identification and forming a plan for how to renovate the raingarden. Embracing the opportunity to learn about a new field, Alex dove in and continued his research as he recruited his fellow Scouts and facilitated an order for new plantings. Other tasks included pruning the dogwood shrubs, cleaning out the sediment catch box, hauling debris and dogwood cuttings to the local yardwaste facility, identifying plants that should remain in the raingarden, planting new plants, and laying fresh mulch. When the on-the-ground project was complete, Alex documented his work with an updated planting plan to support the future success of the raingarden. Staff at Saint Mary's extends a warm thanks to Alex and all the Boy Scout and their families who helped support the project. 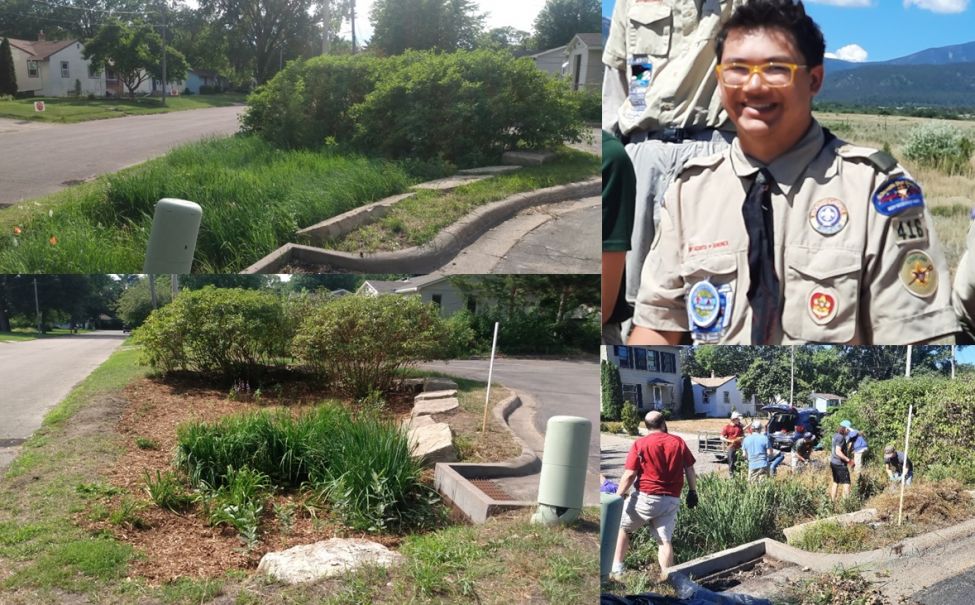 This and several other local raingardens have been built with grant funding from VLAWMO under the leadership of the host organization or landowner. As with all green infrastructure, maintenance is an ongoing community effort that involves patience, learning and adaptation. Each community raingarden is supported by a custom team of staff and volunteers, and while routine maintenance occurs, sometimes a raingarden leader retires, moves, or is no longer able to coordinate raingarden care. Harsh weather conditions such as the recent drought conditions of the area may also pose challenges and puzzles for raingardens, calling for creative solutions and a gathering of resources. In these times larger renovations can help re-spark a team of folks that check-in on the raingarden monthly or every other month.

VLAWMO is thankful for terrific community partners who help VLAWMO's mission to protect and enhance our local water resources!