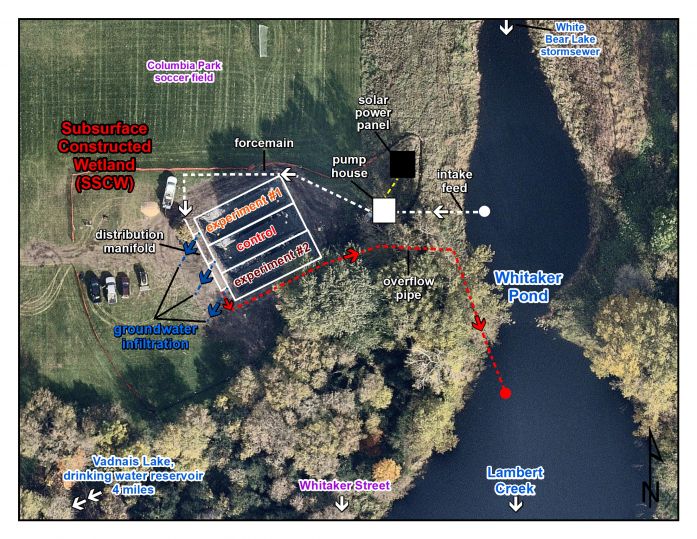 The Whitaker  Treatment Wetlands project was built in 2018, and the research took place during various rain events in the summers of 2018 and 2019.

Whitaker Pond was selected as the project site because stormwater here and in Lambert Creek has shown to contain high nutrient and E. coli bacteria levels. Lambert Creek is listed as an impaired waterbody by the MPCA because of these levels. Lambert Creek E. coli levels were studied in 2016 and 2017, and the results indicated that it's coming from avian and canine sources.

The project is located in White Bear Township in Columbia Park. Stormwater from 640 acres of neighborhood in White Bear Lake drain to Whitaker Pond, and water from the pond is pumped into the underground filter. Three lined treatment cells with different mixtures of sand, gravel, and other materials such as crushed concrete and tire crumbs, filter the incoming stormwater. After a rain event, dozens of samples were taken from each cell at various stages of the filter to assess the nutrient and bacteria content. Samples at the end of the filter indicated the overall results of how that filter media treats the runoff. The water then exited the filter and was directed into a nearby drainfield and back into Lambert Creek.

VLAWMO staff, after following the project and conducting the water sampling, attributes much of the filter's function to it's ability to create anoxic (low oxygen) conditions, which simulates the function of a natural wetland. VLAWMO is excited to present the results of the study into the field of stormwater management on a State-wide and National scale. The findings will be distributed by the LCCMR and BWSR to inform and inspire future projects of this nature. These sorts of engineered wetland treatment efforts hold potential to solve water quality issues in places where historical wetlands have been lost, or when the creation of wetlands isn't feasible in an already built community. One potential idea in developing treatment wetlands as a water quality strategy is to create a sequence, or treatment train of filters along a creek or other drainage systems.

Visit the Whitaker Wetlands project page for more details on the project's grant funding, and photos of the construction with a video on how the system works.

Excerpts from the report conclusion:

"The results of the assessment clearly show that all three of the experimental cells were very effective in removing E. coli (a member of the fecal coliform group and a common fecal indicator bacteria) and nutrients (total phosphorus and nitrate) from stormwater in Lambert Creek. One of the most striking observations of the Project was the dramatic
reduction in E. coli concentrations. During the three storm events monitored in 2019, E. coli concentrations were reduced two to three orders of magnitude (95 to 100%) when compared to stormwater samples collected from Whitaker Pond. These results were similar to Pathogen Analyses conducted by the University of Minnesota (Section 5.2), which suggested that the treatment wetland reduced E. coli levels by at least 95%." 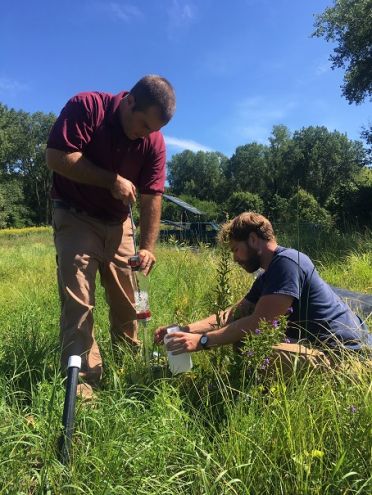