With a rather goofy name and small size, these common critters are often overlooked as part of the aquatic habitat. A closer look reveals their value in the food chain and some neat adaptations that set them apart. 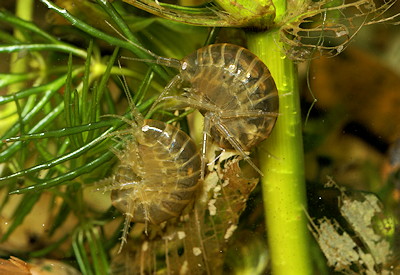 As part of the family Amphipoda, scuds closely resemble shrimp. While not large enough to fill a serving platter at a party, scuds are a top food choice for fish, amphibians, and water birds. Being abundant is sometimes a good strategy for survival, and scuds can pull this off by feeding on a wide variety of plant and animal matter. Like people, they're omnivores! Their most common food source however is detritus - which can be course or fine particles from decaying leaves, wood, and other organic debris. Using a pair of claws, scuds grab and chew this debris as part of nature's clean-up crew. This keeps the material moving through the food web so that smaller organisms can benefit, eventually working up the food chain to support fish and birds.

Another name for scuds is a 'sideswimmer', aptly named for its ability to roll over on its side and scoot along near the stream bottom. Most of the time though, they enjoy the safety of crawling low between rocks and roots. They can live in a wide variety of habitat, from streams to lakes to ponds, as long as there's space at about 1 meter deep.

Because of their ability to live in a wide variety of places and adapt, scuds are moderately tolerant of pollution. If one food source is lacking, they have the ability to switch over to something else such as algae, which thrives when water is in a less-healthy state. But because scuds breathe dissolved oxygen from the water through gills, seeing them in high numbers indicates healthy water and a strong food web. Because fish enjoy them as a snack so much and are frequently seek them out, they're commonly mimicked in fishing and fly fishing lures.

VLAWMO has seen hundreds of scuds this season at the Sucker Lake channel, in Vadnais/Sucker Park. Water Bug workshops are available for school groups, summer camps, and the public. Check out a family-friendly, free event this summer! Visit our events webpage for more information, or visit us on Facebook. 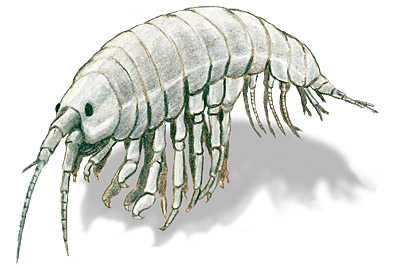