They’re here! With their signature song that heralds the arrival of Spring, Red-winged Blackbirds are a staple of central and northern Minnesota wetlands. Although they feed mostly on insects such as grasshoppers and beetles, Red-wings get a boost from seeds in these early spring months (at times making appearances at backyard feeders). This strategy helps survive those surprise cold bursts of spring that we know and [at times] loathe. If we think spring is tough, imagine going through it as an 85g bird! 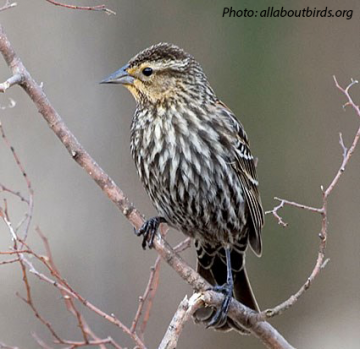 Measuring about 8.7” in length, the male’s glossy black plumage are an easy spot in a sea of early-spring brown marshes. While males typically perch high in obvious locations to stake and defend their territory, females are much more elusive, blending in with streaks of brown feathers (pictured right) and a preference to stay down low with the nest. Males often nest with multiple females in their territory. A nest typically contains 3-4 pale blue-green eggs, with black or brown markings at the larger end. Eggs take 10-12 days to incubate, while both parents (a bit more from the female) feed the nestlings for 11-14 days after hatching. Males under two years display more orange/yellow on their wing bars, and which matures into red with age. This bold red shoulder patch is known as an “epaulet”. A red-wing’s song is often described as a konk-la-ree, with a gurgley start and a trilled ending. 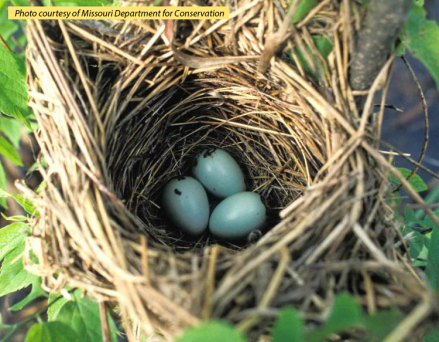 A lesser-known fact that Midwesterners don’t often  see, is that Red-wings also live in salt marshes on the  coasts. Their range is widespread, from summer  nests reaching up to arctic Alaska, to resident  populations as far south as Guatemala. They’re one of the most widely distributed and abundant  species in the world – with an estimated population of 190 million and at least 26 subspecies  identified. 14 of these are found in North America, comprising very subtle differences in plumage,  song, or behavior.

Look and listen for Red-winged blackbirds in open and semi-open habitats. Golf courses, farmland,  cattail marshes, and even shrubby habitats. For blackbirds, these areas bring prime real estate: open  views to defend against predators, plentiful food near water, and dense hiding places close to the  ground. Here in VLAWMO, it shouldn’t take long to find them setting up camp in one of our 500  wetlands. For more on Red-wing habitat, behavior, and nesting, check out this video from the Cornell Lab of Ornithology.