This face of wetlands doesn’t have much of a face. But the botanist who cataloged and named this plant had a face! In the 1890’s, Edmund P. Sheldon found a unique, uncatalogued sedge in abundance around White Bear Lake. For whatever reason, he decided to name it the White Bear sedge. The scientific Latin name, Carex albaursina breaks down to mean just what its common name says: Carex (sedge), alba (white), and ursine (bear).

Sheldon was a botanist with a B.S. from the University of Minnesota. He traveled between Oregon, Missouri, and Minnesota on many botany adventures. When he noticed the White Bear sedge, it was unique in that it had broader leaves than most sedges, with whitish bases and intricate spikes rising from the center.

Sedges are one of the most abundant wetland plants, with an exhaustive amount of diversity. Sedges are wetland specialists because provide them a wide variety of soil options to choose from. Some wetlands are saturated, some are partially wet, and some are only wet at certain times of the year. Over centuries, new types of sedges have filled in these spaces all along the moisture spectrum. Sometimes even a tiny adjustment over time inspires a new sedge species. With this diversity in soil and plant life, wetlands are a powerhouse for the food chain. Insects, beetles, aphids, flies, moths, butterflies, grasshoppers, birds, and deer are all known to feed on sedges. To guarantee first dibs, some insects have even chose to focus on a a single type of sedge. For example, the Clemen’s Cosmoperix Moth focuses on the leaves of the White Bear Sedge. In this way, wetlands form an intricate web of relationships. When one part of the web is tugged, it pulls on all the others. 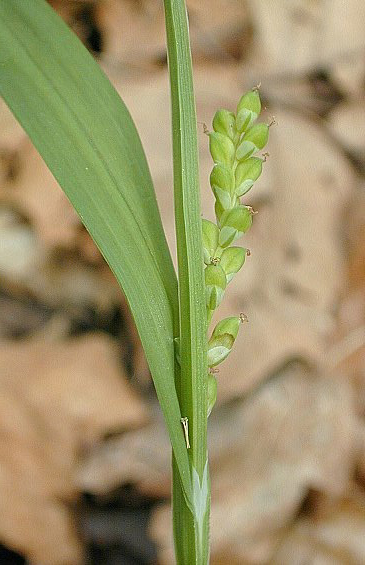 The White Bear Sedge actually grows beyond White Bear Lake to reach from New York to Georgia to Minnesota, and even into Canada. It’s one of the more shade-dwelling, forest-loving sedges, finding a cozy niche in wooded ponds and wooded borders of open wetlands. White Bear Sedge is also cross-pollinated by the wind, grows up to 24”, and has rhizomotous (running) roots that create colonies on a forest floor.  Good places to look for it include the Gateway Trail, Lee and Rose Warner Nature Center, Tamarack Nature Center, or Century College’s Wood Duck Trail, among others.

But there’s something else that’s noteworthy about the White Bear Sedge. At the turn of the century, many plant species were being cataloged in a wave of scientific advancement. With dozens of species named after the discoverer, Sheldon instead chose a place to represent this humble, sleek sedge. It makes one wonder how this come to be. Was he appreciative of the White Bear Lake area, or the lake itself? Did he have fond memories there, or enjoy the scenery? Was he lazy with naming, taking the route of convenience?                                        Image: Illinois Wildflowers

We may never know his motives or reasoning, but Edmund Sheldon seems like he’d blend in with Minnesota culture. As comical as “MN nice” is at times, those who relate to it know that it also serves to make space for appreciating the broader community.

We can see that our human community isn’t so different from the wetland community… but what if they’re really of the same web? After all, what’s in a name? What’s in a place? What values, inspiration, and appreciation do we attach to our place, and how are they reflected back to us through the stories we tell? Sometimes our own stories seem unclear or torn in different directions. But like a botanist, we can always pause, take in the scenery, and take a closer look. Doing so helps to see appreciate our own intricate web of relationships.

For more on projects that restore our watershed and the valuable function of wetlands, check out www.VLAWMO.org/projects.