VLAWMO is pleased to announce the winners of its annual award program: The Watershed Steward Award and the Watershed Partner Award. Each award is an effort to celebrate success stories and partnerships in water resources including efforts in education, management, planning, and others. Award nominations were provided anonymously from community members, and were voted on by the VLAWMO Technical Commission (TEC) on November 10, 2021. Formal recognition occurred at the VLAWMO Board of Directors meeting on December 8th, 2021.

Have you seen watershed leadership in action? Nominations forms are available on our website and accepted year-round. Visit the awards home page for nomination forms and criteria.

This award is open to volunteers, neighborhood or lake associations, businesses, or community groups who have worked to improve water resources and watershed education. 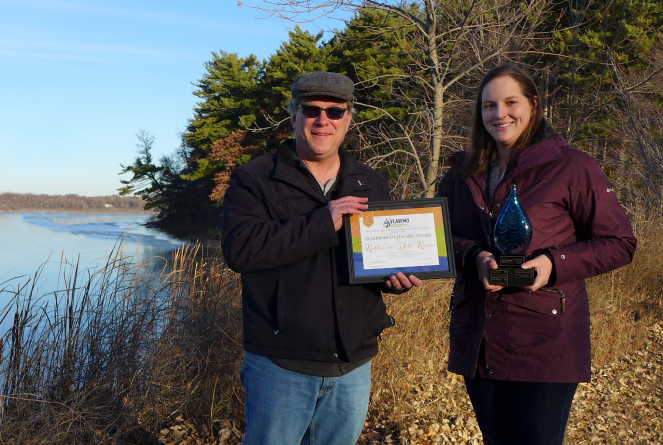 Katherine has been a leader and participant in a variety of VLAWMO programs. Her efforts have included developing and presenting Rainbarrel Bonanza Workshops, helping pioneer a new LeafPack macroinvertebrate monitoring program, and being civically engaged on multiple levels.

As a Minnesota Water Steward, Katherine planned a rain barrel education and installation program. She has helped dozens of residents in the watershed to install rain barrels while also learning about the surrounding watershed, water conservation, and the importance of thoughtful stormwater management.

Katherine has worked independently and with other volunteers to monitor macroinvertebrates in Lambert Creek to help improve our understanding about long-term water quality trends.

Civic engagement: 2019-2021 Katherine has demonstrated a dedication for watershed advocacy and improvement. In addition to involvement with watershed programs, she also participates in the Vadnais Heights Planning Commission and the VLAWMO Citizen Advisory Committee.

As a participant in VLAWMO’s cost-share landscape grant program, she installed a raingarden of her own surrounded by various native plantings. She has generously offered these home projects as learning and conversation opportunities for neighbors.

“Katherine has been a watershed leader that has helped dozens of neighbors and community members think more critically and strategically about local water and our relationship with it. She takes initiative and leads by example, and does so out of a contagious, positive, and welcoming sense of enthusiasm.”

This award is open to municipalities, counties, schools, or state entities working in the VLAWMO watershed. Projects in focus include infrastructure that strives to improve the impact of stormwater runoff, or to protect and/or improve local waterbodies such as lakes, creeks, and wetlands. Policies and practices in winter and turf maintenance, municipal water use, and MS4 programming (link), are also considered for this award. 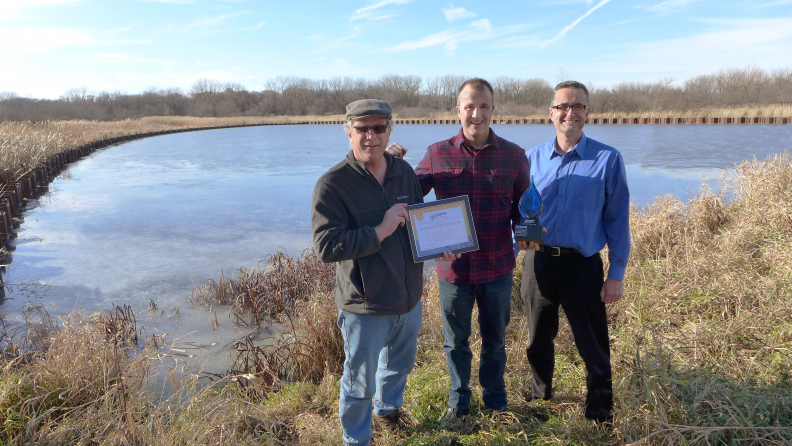 Jesse was involved in the Lambert Lake Pond and Meander from its conception in the Fall of 2019. This particular stormwater storage feature was first built in 2005, but had since exceeded its projected lifespan. The goal was to reinforce the Lambert Lake Pond as well as better utilize the larger Lambert Lake wetland complex. A few years later, the end result would be a reinforced steel Sheetpile to secure the Lambert Lake Pond. A meander directly south of Lambert Lake Pond was also built, helping to steer the straight agricultural ditch into a floodplain asset that disperses water into the available wetland space. Jesse helped VLAWMO to secure a loan from the MPCA, co-presented a public info-session with VLAWMO, and represented the project’s vision and goals to the Vadnais Heights City Council.

From 2018-2021, Jesse has planned carefully with the Vadnais Heights City Council, public works, and VLAWMO to help pursue maintenance of key segments of County Ditch 14.  Utilizing hydrology and hydraulic modeling concerning the creek’s flow, Jesse helped coordinate general clean-up for improved flow, resizing and strengthening culverts in areas of high velocity and impact, and strategic dredging in places of high sediment accumulation. Maintaining ditch performance is an ongoing effort and Jesse has taken an approach that blends immediate need with long-term vision while also working in the confines of a budget. Through it all, he has supported a partnership model that builds bridges between VLAWMO and the City, allowing expertise and resources to complement each other and gain more traction together.

The MS4 permit (Municipal Separate Storm Sewer System) is a program administered by the Minnesota Pollution Control Agency, and applies to Cities across Minnesota. The permit helps communities maintain, improve, and keep track of stormwater features such as stormdrains, ditches, and storm ponds. Not only does the permit guide communities in keeping these features functioning well, but also steers communities towards improved water quality in lakes, rivers, and streams.

Jesse took an initiative with the new 2020 general MS4 permit, collaborating with multiple watersheds that overlap with Vadnais Heights as well as other nearby Cities. These collaborations included the use of road salt and de-icer strategies to maintain safe surfaces while reducing excess, educating the public on proper yardwaste disposal and why not to dump leaves and grass clippings into ditches and wetlands, promotion of responsible pet waste pick-up, and others. Jesse’s time and effort in these areas have brought the City’s permit into an innovative array of efforts that go above and beyond the basic requirements.

Native plants and stormwater features such as raingardens are valuable for soil health, pollinators, and the watershed, but require a transition beyond conventional turf grass and turf maintenance. Jesse has supported and collaborated on maintaining existing stormwater features as well as pioneering new ones. These include installing a native planting demonstration at the Vadnais Heights Commons (2019), assisting with the prairie park in front of City Hall (2017-2021), including a new raingarden in the design for the Bridgewood Park renovation (2021), and helping to maintain the Vadnais Heights Fire Department raingarden (2019-2021).

Each project has a unique backstory or grant, and are sometimes started by a leader or group that is no longer active in the City. While these transitions can be confusing or overwhelming, VLAWMO is thankful for Jesse’s recognition that these projects still have value to the watershed. In a busy City that juggles the many needs of public life, such projects would be easy to let fall by the wayside. Jesse’s effort has helped keep them serving as long-term tools for stormwater storage, healthy soil, and climate change.

The VLAWMO Technical Commission (TEC) meets monthly at the Vadnais Heights City Hall to plan and vote on projects, maintain connections between VLAWMO communities, and present its efforts to the Board of Directors (BOD), which meets every other month. Jesse’s time, thoughtfulness, and expertise have helped shape VLAWMO to what it is today, and nurtures a productive partnership between VLAWMO and the City of Vadnais Heights.

“Jesse consistently brought an upbeat attitude to both easy tasks and challenging puzzles, offering insight and perspective that helped VLAWMO make informed engineering decisions. VLAWMO was able to accelerate and expand its goals on Lambert Creek thanks to Jesse’s supportive partnership and consideration of both short and long-term goals.”