See the filter in action:

In the summer of 2017, VLAWMO submitted a Board of Water & Soil Resources (BWSR) Clean Water Fund (CWF) grant application to fund stormwater improvements with an iron-enhanced sand filter. The grant for $93,000 was awarded in December, 2017.

A history of ditching combined with receiving increased stormwater has been taxing on this wetland, causing it to hold extra nutrients and sediment. The 4th and Otter Lake Road intersection was first identified as a nutrient "hot spot” in 2008 during a preliminary study. At this time, VLAWMO was in the midst of other projects, but bookmarked 4th and Otter for follow-up studies and to seek grant funding.

Data collection and a feasibility study were conducted in 2017-2019.  To collect data, staff used an automated storm sampler that took on-site samples during and after rain events. In 2017, data showed that the wetland was creating a sediment-phosphorus release into Birch Lake. It was determined that this release was a contributor to increasing algae blooms in Birch Lake. The study determined that an iron-enhanced sand filter was the most cost effective and space efficient project to treat stormwater flowing into Birch Lake. The effort was endorsed by the City of White Bear Lake and the Birch Lake Improvement District (BLID) and fit well with VLAWMO’s mission to protect and preserve local water resources.

Visit the Birch Lake page for studies, past projects, and data on Birch Lake, including a lake fact sheet.

VLAWMO worked with project partners at the City of White Bear Lake, the Birch Lake Improvement District, and Ramsey County to develop an Operations & Maintenance Agreement for the 25-year lifespan of the filter. Also included in the agreement as well as site and project coordination. Construction began in April, 2020 with Blackstone Contractors LLC. The graphic below is a general illustration in how iron-enhanced sand filters are designed. 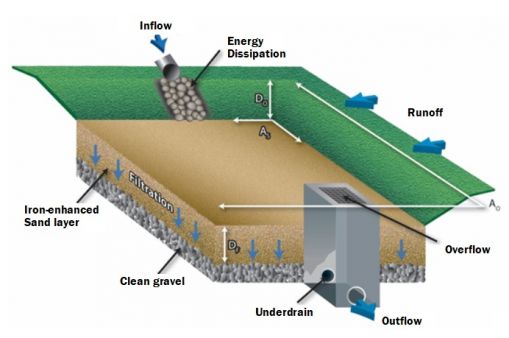 The completed iron-enhanced sand filter will have a two-fold benefit for local water resources.

Cleaner stormwater entering Birch Lake: The project design takes stormwater from the surrounding neighborhood, passes it through the filter, and sends it into Birch Lake. While in the filter, the water interacts with the iron-enhanced sand (filter media) with a chemistry interaction. The iron-enhanced sand “grabs” onto the phosphorus, holding it in the filter media as the water exits. Using past stormwater data combined with an estimation of how much phosphorus is running off the landscape, it is estimated that the filter reduces phosphorus loading into Birch Lake by 8.1 lbs/year. In context, just one lb of phosphorus can create up to 500 lbs of algae. Cleaner water resources is both a part of VLAWMO's mission and an aid to other waterbodies downstream.

Invasive buckthorn shrubs were also removed adjacent to the construction site and the wetland. This removal reduces the amount of leaf-litter that could potentially fall into the filter and reduce its treatment ability over time. Native shade plants were introduced to the site to replace the buckthorn. These native plants were selected for their ability to stay low to the ground yet stabilize the soil with their strong root systems. As the native plants encourage healthy and stabilized soil, they support wildlife such as birds, pollinators, and other wildlife who utilize Birch Lake. 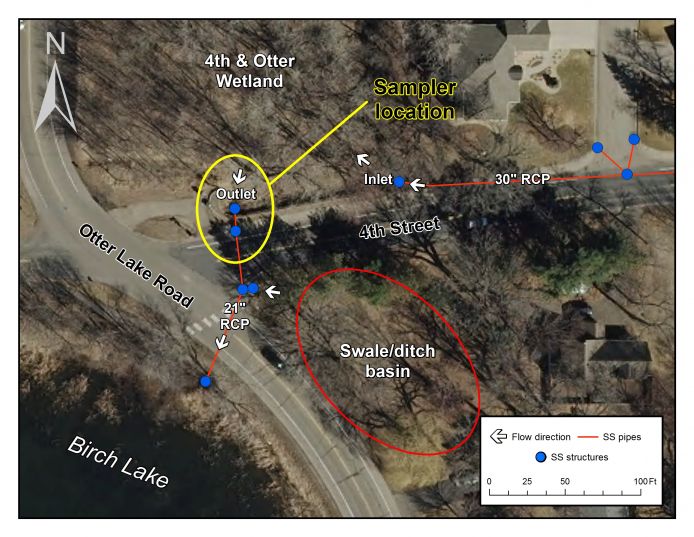 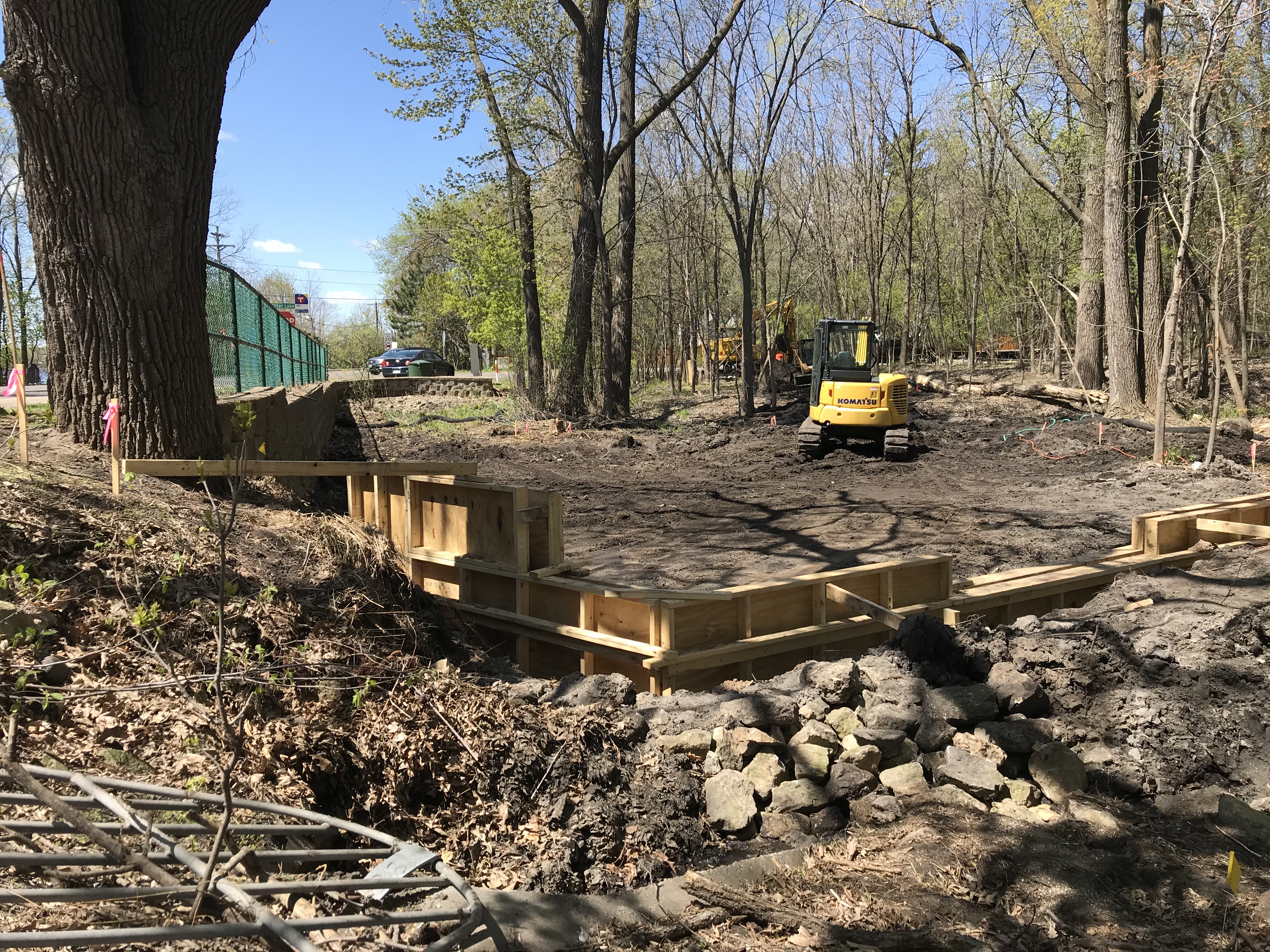 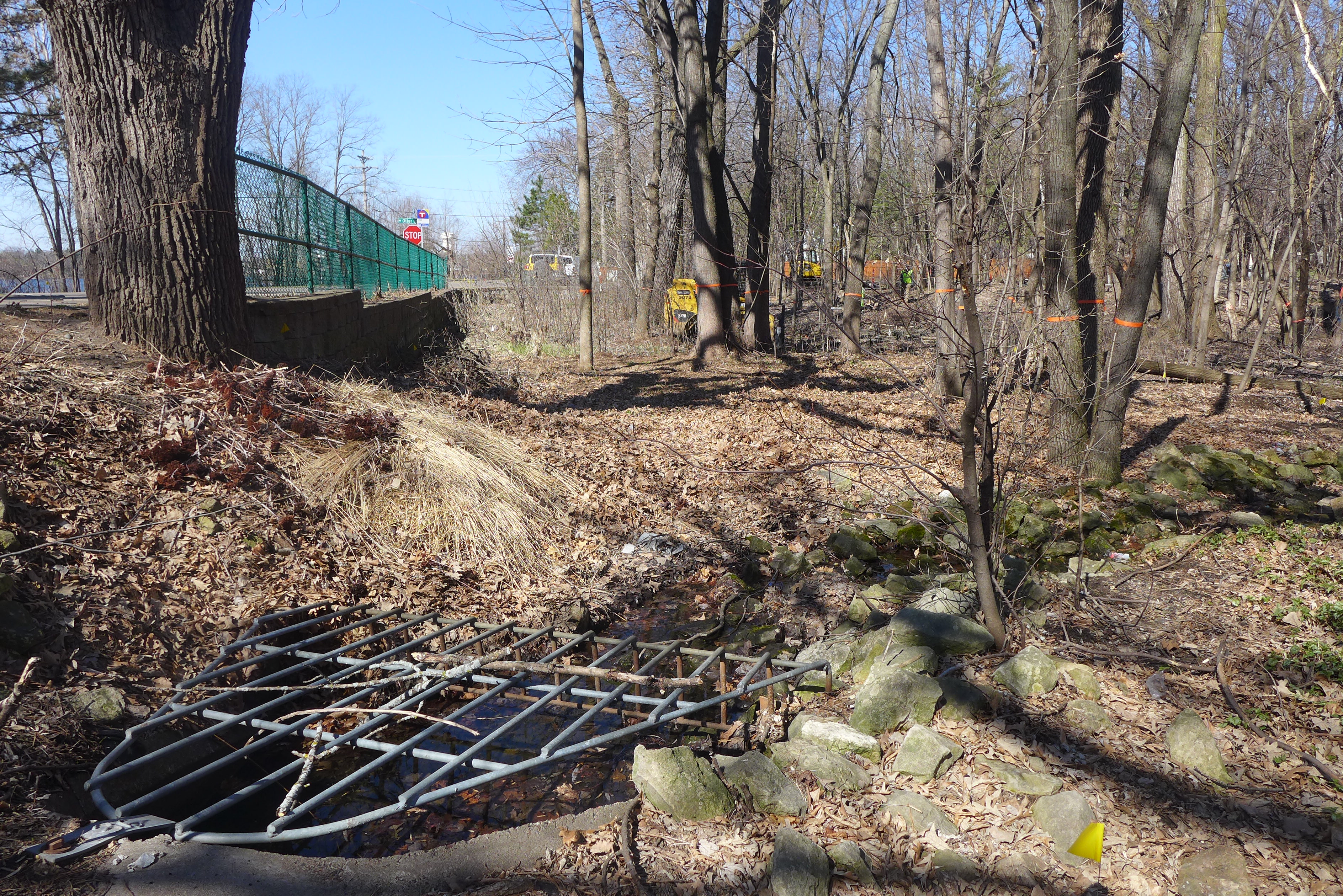 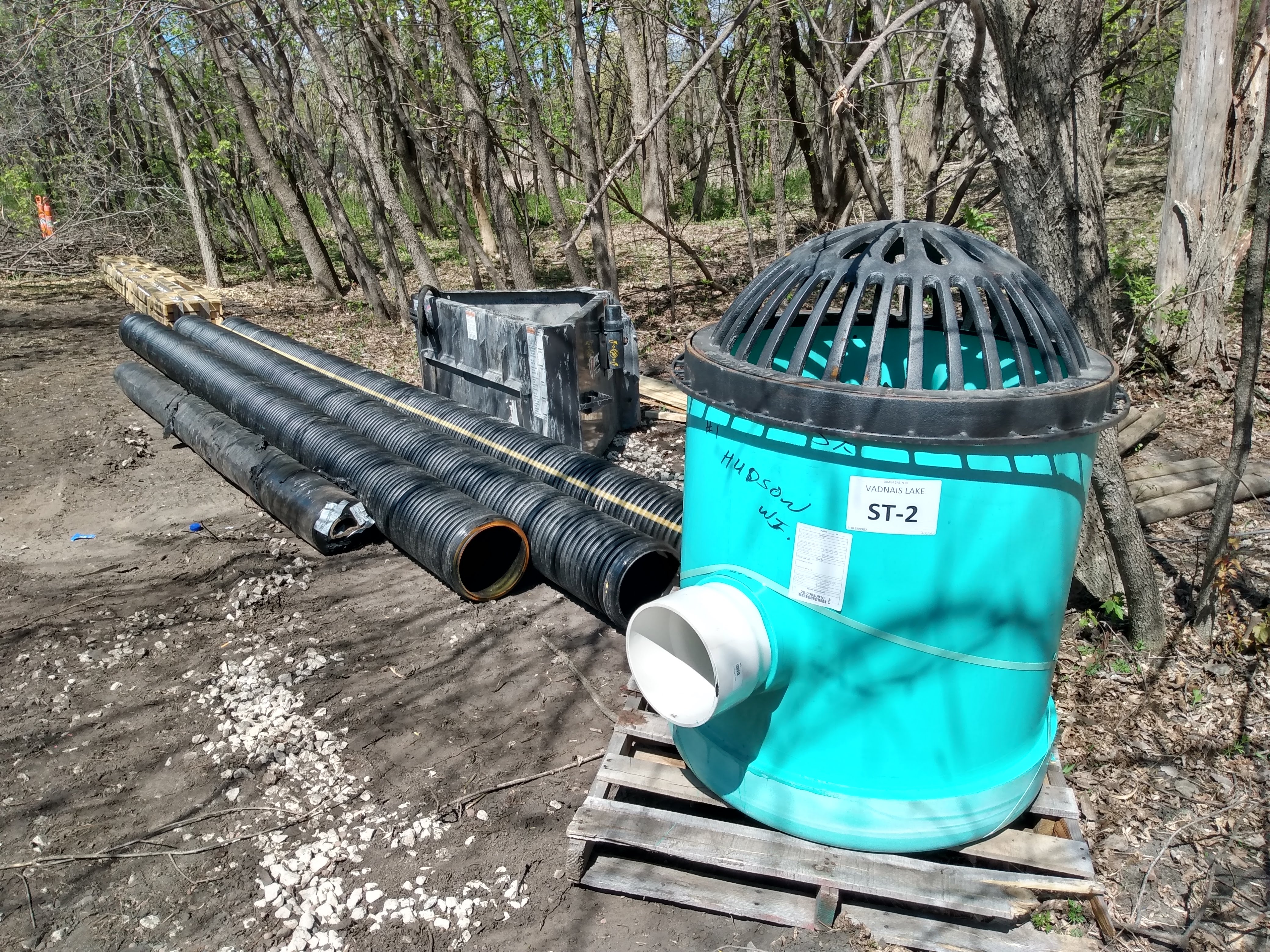 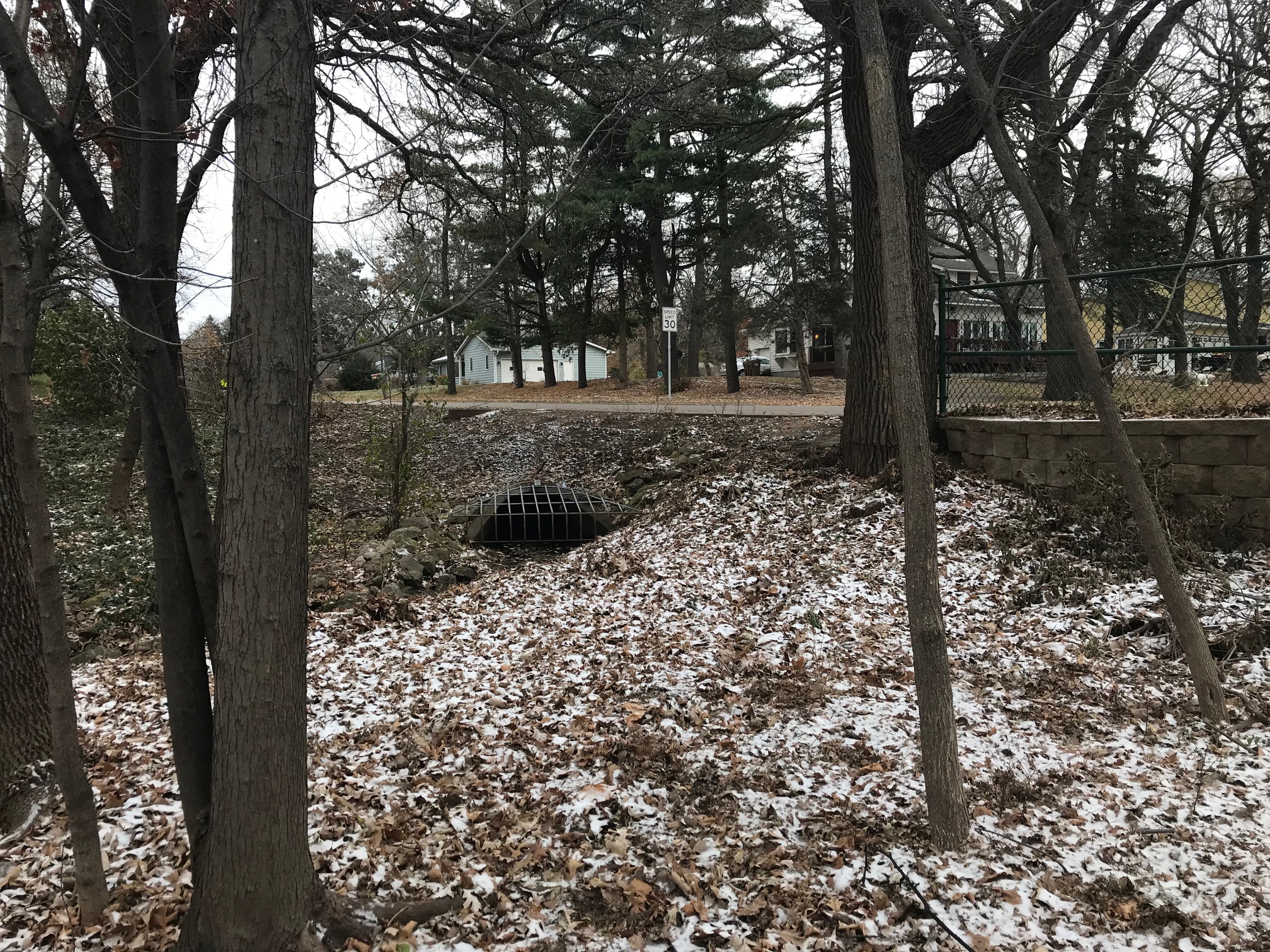 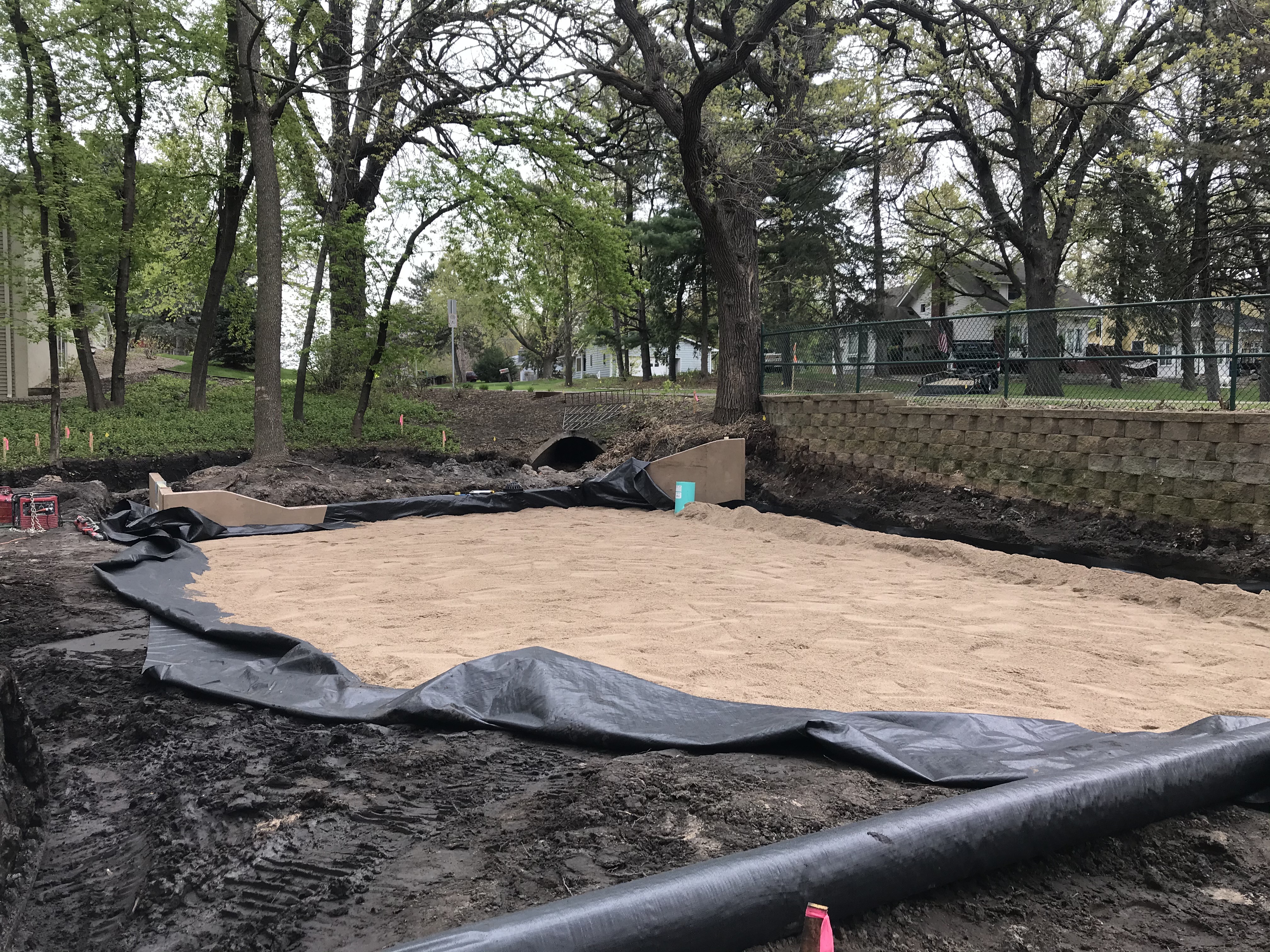 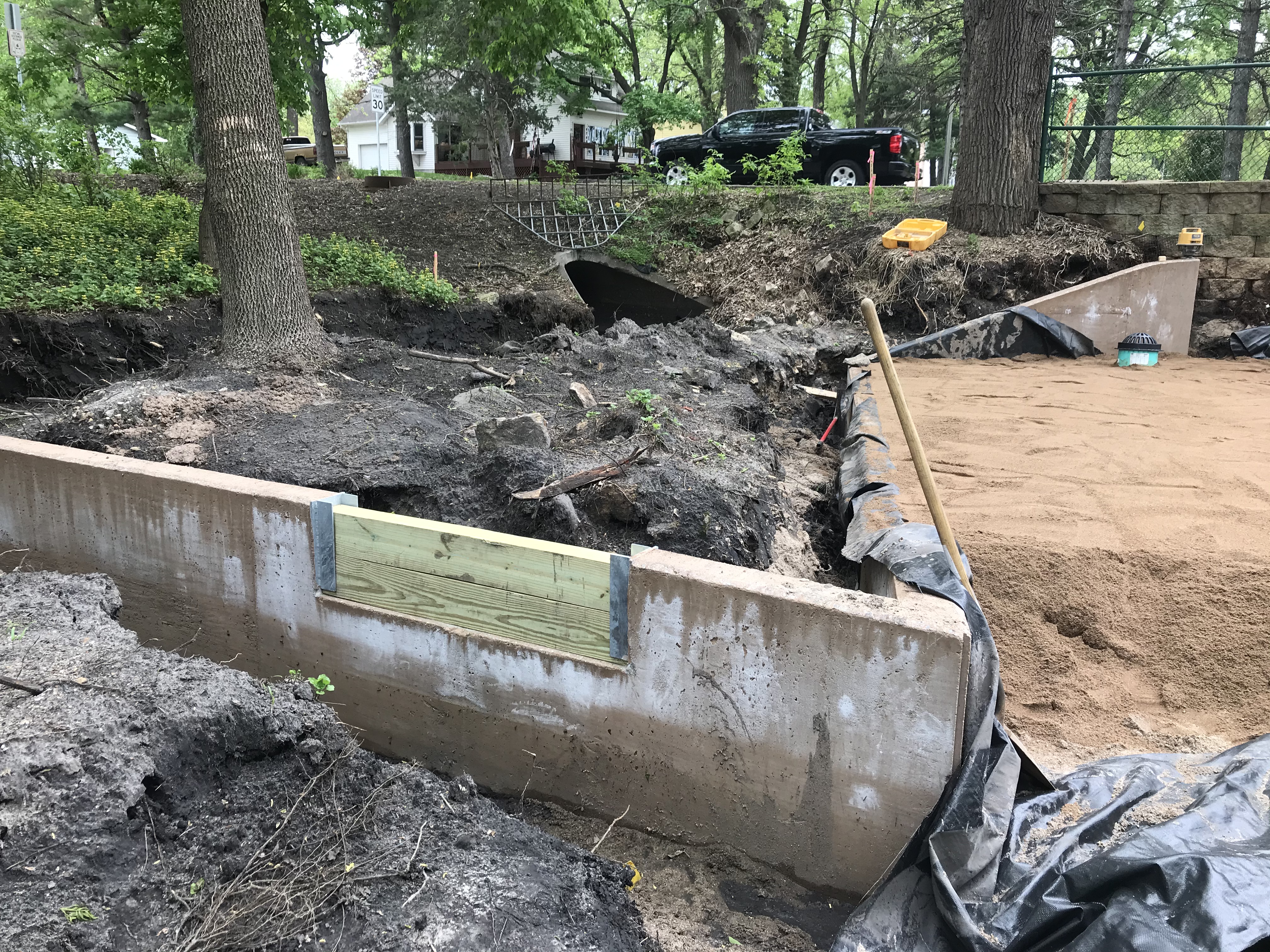 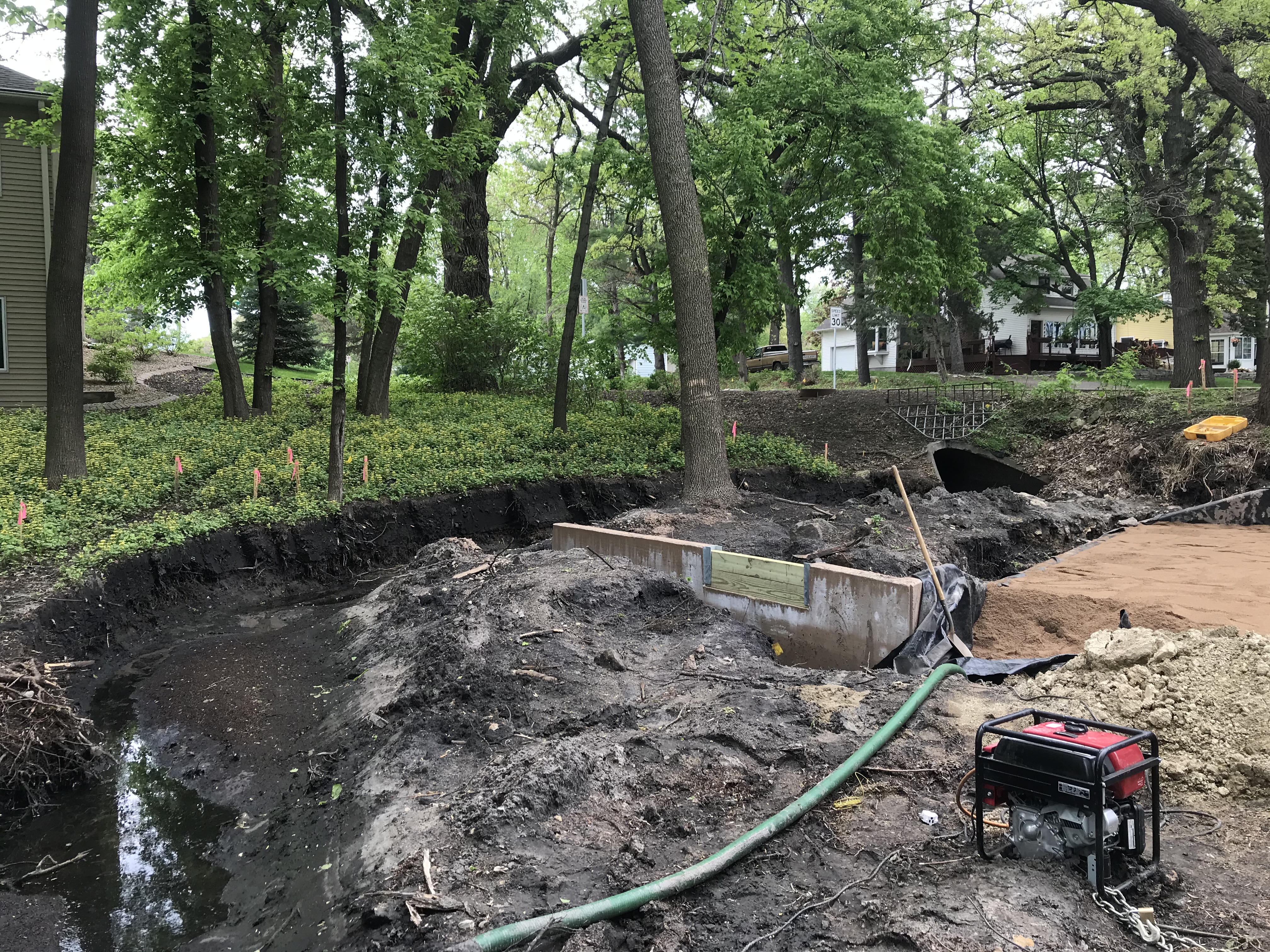 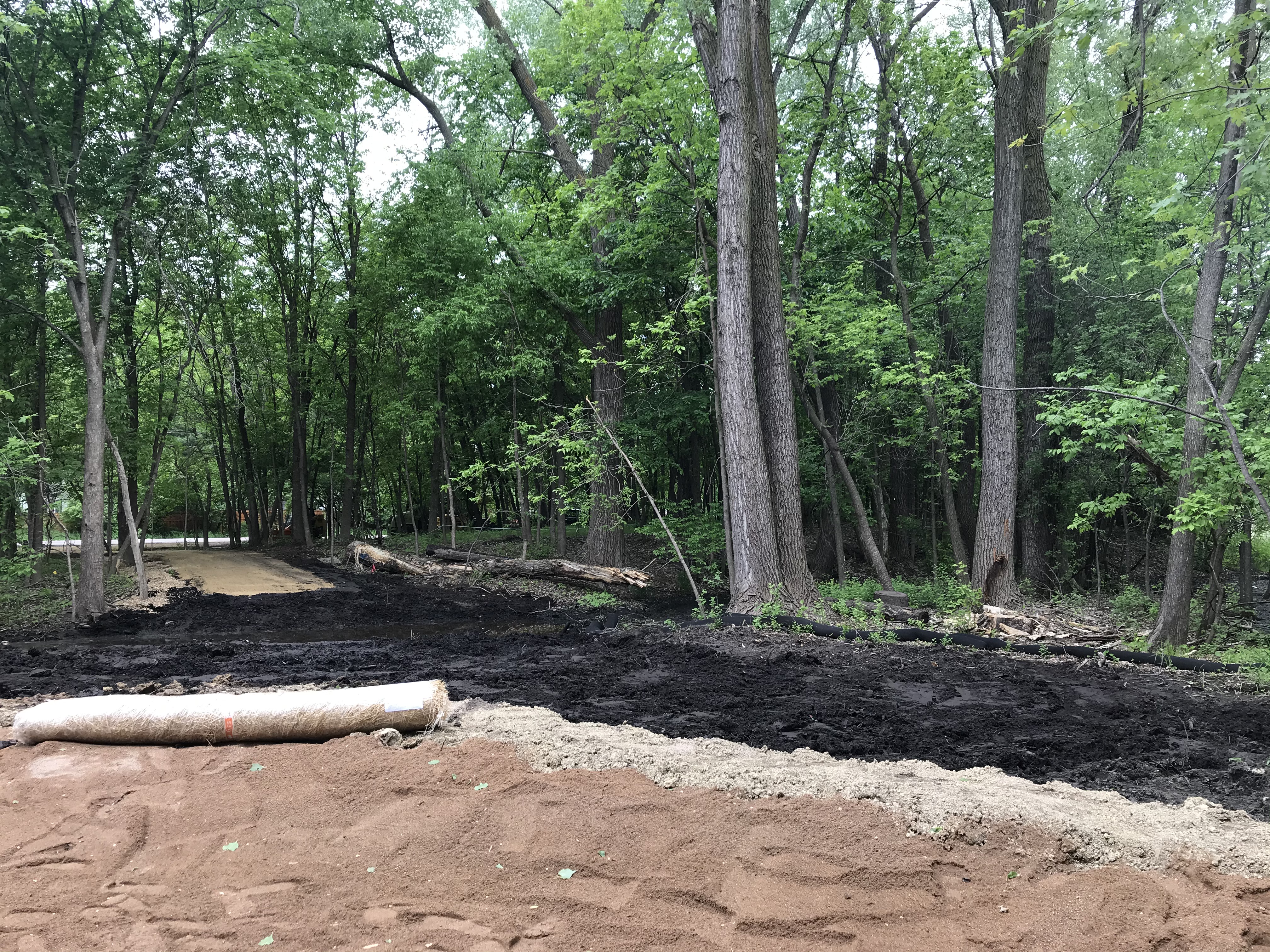 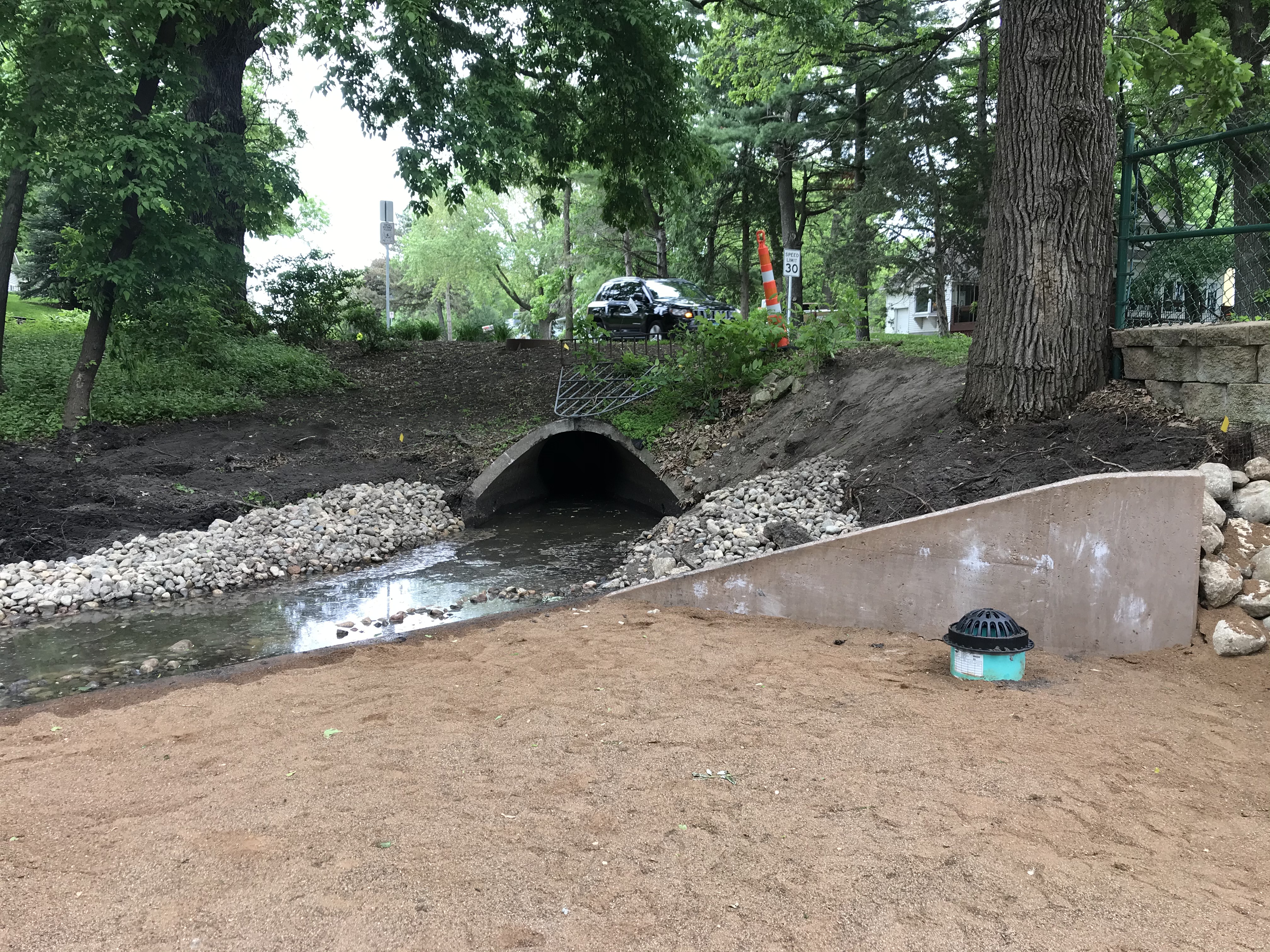 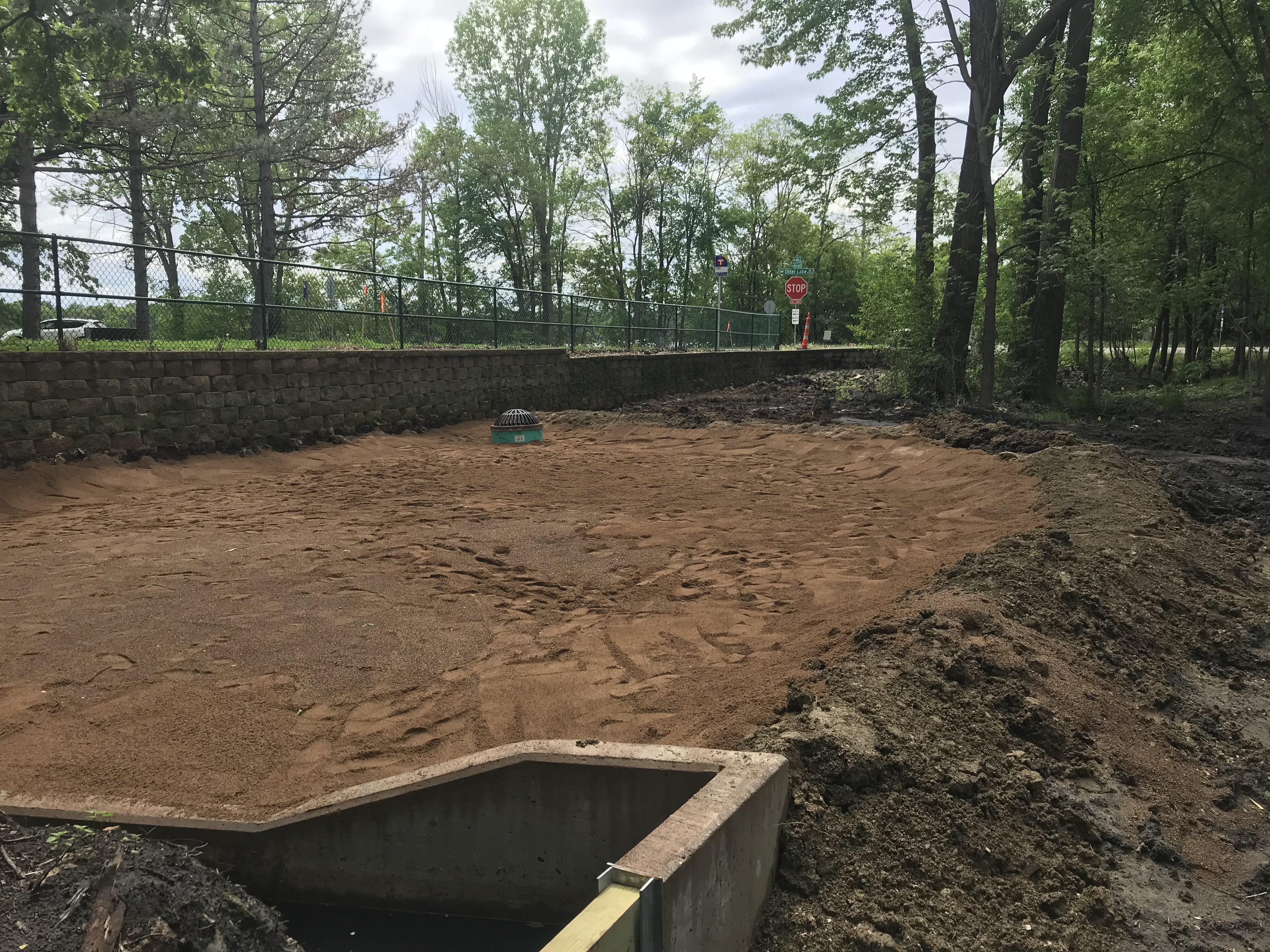