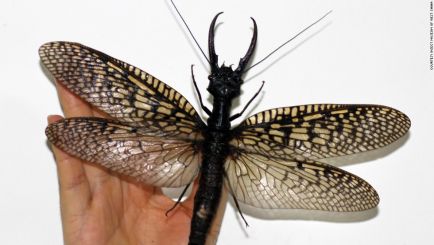 Dobsonflies are some of the largest and most impressive insects alive today. Out of many species of dobsonfly, the Giant Dobsonfly of China, India, and Northern Vietnam holds the record for the world’s largest insect. Measuring 21 cm, the Giant Dobsonfly’s (right) wingspan is about the size of a large hand stretched thumb to pinky. Yikes! Many will be relieved to learn that we don’t have such monsters lurking in the forests and wetlands here in Minnesota. Here, the Eastern Dobsonfly measures at about 5 ½ inches, and can be found from Canada to Mexico, East of the continental divide. Though similar, dobsonflies differ slightly from alderflies and fishflies. Dobsonflies and fishflies are both of the Corydalidae family, while alderflies are of the Sailidae family. 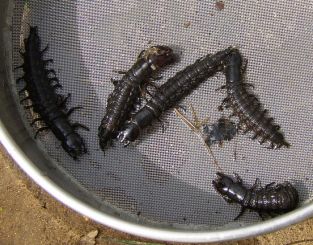 Larvae are known as hellgrammites, and are a top invertebrate  predator of rocky streams. Measuring up to 4 inches, they can  be  identified by their dark brown/black color, and line of plates from  its lower back to its tail. These plates are armor from  larger  predators such as fish but also other hellgrammites who’re out to  swipe new hunting rocks. Hellgrammites are well  known by  fishermen, as they make excellent bait for bass, and can  sometimes be found for sale at bait shops. Some nicknames  it’s  received  over the years include alligator, toe biter, crawler  bottom,  and hell diver. Their rugged look and fierce pincers  surly  help build  such  daunting reputations, and as the name toe-biter implies, hellgrammites can give a hefty bite. While  they’re not poisonous, they’ll  let you know you stepped in their turf! Despite being a bit testy, hellgrammite’s goal is more set  on protection and hunting other  insects like mayflies than giving humans the heebie-jeebies.

The series of spikes found along their abdomen helps them anchor to sand and debris at the stream bottom. Having both  gills  and  pores, hellgrammites can breathe both in and out of water. Because of this they’re sensitive to changes in water  chemistry,  as any contaminants or drastic changes in the water can easily interfere with its breathing. The ability to breathe  out  of water comes in handy, as they crawl out of the stream and up to 50 feet onto land to pupate (become adults), digging  small  chambers in moist spots under rocks, logs, or leaves. They live for 1-3 years as larvae, taking longer to grow in  northern  climates. It is said that the vibrations of thunder act as a sign for mature larvae to begin their land journey. Perhaps  they found  that this is generally a safer time to trek onto land, as rain would deter birds, turtles, or frogs from making them  into a crunchy  snack. 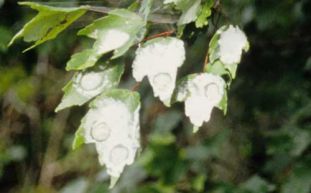 After 1-4 weeks in their cocoon, adult Dobson flies emerge in late  Spring or early Summer only to live for a few days.  It’s believed  that they don’t eat as adults, as their main focus is to mate and lay  eggs. Mating is where adult male Dobsonflies’ large mandibles  come in handy – they use them to intimidate other males and for  courting females.  While these huge mandibles are a frightful  sight, males don’t even bite! The mandibles are
unable to get enough leverage to  use them  for harm. Females  however, can bite in the way that hellgrammites do. They mean no harm to humans, and bite only in  defense. 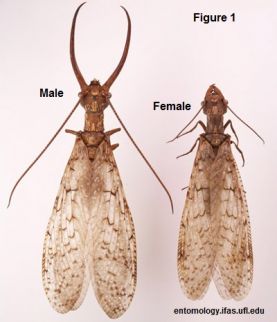 Adults are nocturnal, and may gather in large numbers around outdoor lights at night  during hatching events. Once mated, they lay their eggs on the undersides of leaves and  branches, usually over-hanging a stream. Covered in a white protective material, the eggs  are  laid in up to 5 layers, each layer containing up to 1,000 eggs. These eggs incubate for  2- 3  weeks, then hatch as young hellgrammites drop to the ground to crawl into the stream. If they’re lucky, they’ll avoid the risk of becoming a snack and drop directly into the stream-voila!

While VLAWMO has more slow-moving water than rocky, rushing streams that dobsonflies are known for, they have been spotted in our watershed. If you find hellgrammites or dobsonflies here in VLAWMO, help us assess the health of our water by letting us know or sending a photo!

A Successful Season of Carp Removal on Pleasant Lake

A summary of carp removal activities on Pleasant Lake during the summer of 2022.